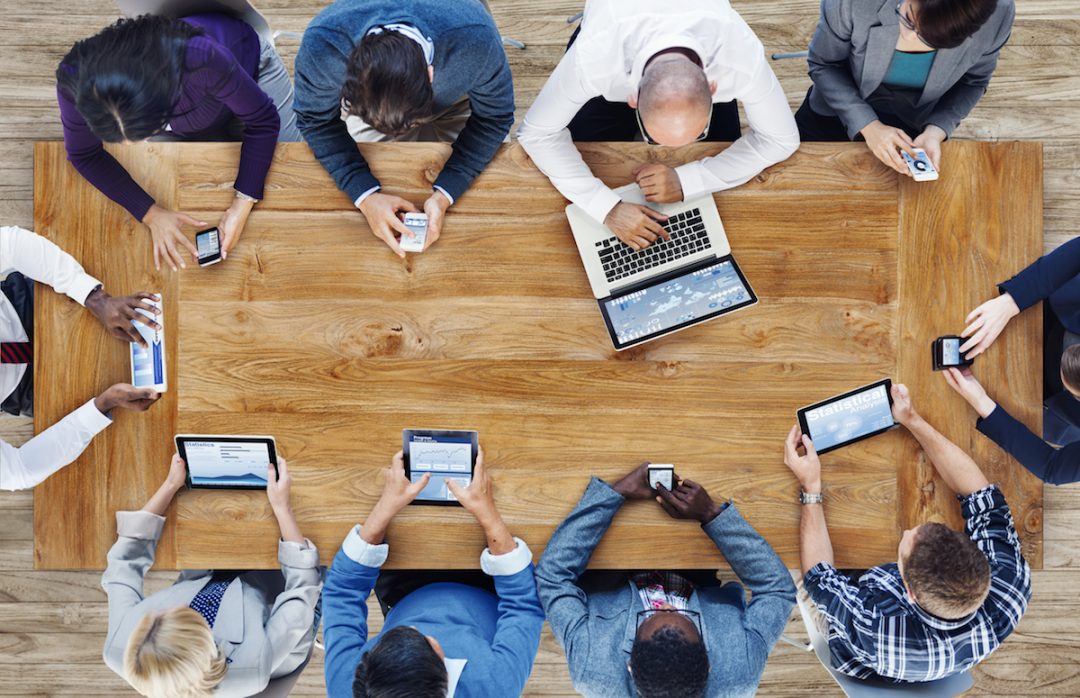 For most of us in business, meetings take up a good part of our weeks. We’ve all been in really productive meetings where everyone leaves feeling energized and accomplished. Unfortunately, we’ve also all been in the meeting where no one is quite sure of the objective and the room is filled with open laptops or fingers flying over cell phones. Way too often the meetings of today are highly inefficient and unproductive. It’s time we took a look at how we’re doing things and figure out what’s not working.

First, let’s dispel a common myth. “Multitasking” became a buzzword years ago, but the truth is our brains can only focus on one thing at a time. A recent study at the University of Sussex has shown that brain damage can occur over time from too much multitasking. If we’re in a meeting and working on our presentation for the next meeting or responding to emails, we cannot truly participate in an effective way. Second, let’s all agree that the people invited to the meeting should be there because they’re needed and everyone should know what the meeting is expected to accomplish. That being said, here are four simple, effective, and easy to implement steps to better meetings.

#1. Clear Objective: Put a clear agenda and objective in your meeting invitation. The clearer you are on what’s happening in the meeting, the more likely you will have the right people show up. Not only that, but the people that show up are more likely to be prepared because you’ve told them what to expect. Empty meeting invitations with only a subject, date, and time are completely unprofessional and way too common. Taking a little time to think this through and type it out will save everyone time in the long run.

#2. Keep it Small: Meetings with 15 people or more should be scarce and mostly informative meetings with one or more people presenting information. For any meeting that is more hands on, the smaller the better. We sometimes fall into a habit of quickly throwing people onto a meeting invite to cover ourselves without giving enough thought to who really needs to be there.

Make an intentional list of participants then be smart about using the “Required” and “Optional” fields in the invitation. Mention in the invitation that those listed as Optional are not required. Don’t put everyone as Required and expect people to make their own decision. Also, don’t assume people will pay attention to whether they’re Optional or not unless you specifically call it out. (When’s the last time you checked for this?) Imagine if everyone did this—would our calendars still look like a game of Tetris or might we have fewer meetings and more energy to focus on the ones that matter?

#3. Keep Control of the Guest List: You will inevitably hear, “You should add so-and-so to the invitation.” The problem is, then so-and-so will invite someone from his team and pretty soon you’ve got a 20-person meeting or worse. Fast forward to the meeting and you’re guaranteed to have a big group of people, working on their laptops, half-listening, and annoyed that their time is being wasted.

Push back when people ask to be added to the meeting or to add others. Ask questions. Make sure it’s appropriate. As the meeting organizer, it’s your job to ensure the right people attend and the wrong people don’t. Having the wrong people in a meeting will distract, derail, and waste time. Also, looking back to #1, a clear objective will help people know who’s really needed.

#4. Okay, it’s meeting time. You’re in charge. Set expectations, rules, and boundaries. Explain to people why it’s important that they pay attention and stay engaged. Make sure they know what needs to be accomplished. Don’t be afraid to say something like, “We’d like to ask you to limit multitasking so that we can be productive as a group.” It’s a polite and professional request. People will shut their laptops so fast you might blink and miss it … and you’ve just gained some credibility and respect.

It’s really just a matter of getting back to basics and taking the time to truly plan a meeting—even if that only means spending 10 minutes organizing your thoughts and an objective, and thinking about who should attend without just defaulting to the usual suspects. With the right people, a clear goal, and undivided focus, your meetings will leave you feeling positive rather than dreading the next one.

This article was originally published on Linkedin Pulse.

You can find out more about which cookies we are using or switch them off in settings.

This website uses cookies so that we can provide you with the best user experience possible. Cookie information is stored in your browser and performs functions such as recognising you when you return to our website and helping our team to understand which sections of the website you find most interesting and useful.

Strictly Necessary Cookie should be enabled at all times so that we can save your preferences for cookie settings.

If you disable this cookie, we will not be able to save your preferences. This means that every time you visit this website you will need to enable or disable cookies again.